Staff Selection Commission has rolled out a notification for the Multitasking Staff Positions. The notification is released for around 7099 posts of SSC MTS. The online application process has been started and candidates will have to submit their application form online through the official website of SSC: ssconline.nic.in.

Candidates who are going to apply for the SSC MTS Recruitment 2021 must be curious to know the Multitasking Staff Salary Structure and Basic Pay. The Staff Selection Commission has revised the Salary Structure for CGL, CHSL, and MTS Posts after the 7th Pay Commission. And obviously employees will get a hike in salary now.

Now a question must be raised in your mind that “ What is the In Hand Salary of SSC MTS Employees”. So if you are still not aware of the SSC MTS Salary Structure 2021 or in Hand salary After 7th Pay Commission then this post will definitely help you.

Here we have provided detailed information about the SSC Multitasking Staff Salary Structure after implementation of the 7th pay Commission. You can also check the details of Grade pay, basic pay, DA, HRA, Gross Salary, in Hand Salary on this page. Read the complete article for detailed info about How Much Salary SSC MTS Gets?

SSC Multitasking Staff (MTS) is a non gazetted & also a nontechnical post of the central government. The various kinds of vacancies are released under the MTS Notification such as Mali, Dhobi, Peon, Chowkidar, Helper and others. The Pay band -1 of SSC MTS is Rs.5200 – 20200 + Grade Pay Rs.1800.

So the in Hand salary of MTS employees is around 18000/- to 23000/- Rupees. If you want to understand the salary structure of SSC Multitasking Staff in detailed then you must have to go through the complete post.

SSC gives the highest salary to its employees than any other government job. If you are on Grade C or Grade D of Staff Selection Commission after that your minimum salary would be around 16000/- rupees per month. 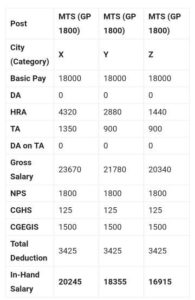 SSC gives the increments in Grade Pay of MTS with the promotions on time to time. Below you can see the changes in SSC MTS Salary with Promotion.

Annual increment of 3% is given to the SSC MTS employees on the total salary and payband. Employees get the salary perks with the pay commission of central government. We will provide you the information about the upcoming pay commission and their effects on SSC MTS Salary Structure.

What is the basic pay of SSC MTS Employees?

How much increment was made by the Government in SSC MTS Salary Structure after 7th Pay Commission?

How much annual increment SSC MTS Employees gets?

The annual increment of 3% is given to the employees on their total payband.

Where I can check the official details of SSC MTS Salary?

Although we tried to share the details of SSC MTS Salary Structure 2018 on this page. But the official details can be checked on the official website Staff Selection Commission only.

We shared here all the details of SSC MTS Salary Structure 2018 in Hand, Basic After 7th Pay Commission. If you have any queries regarding this article, you can write to us in the comment box. We will try to solve your queries as soon as possible.

Note: Refer the official website of Staff Selection Commission for any doubt or query.

Disclaimer: We here declares that “www.resultuniraj.co.in” is not the official website of any coaching/ board/ or any private & Government department.

We are here just to provide the information. And the information we provide here is based on social media and other media sources. We also advise all to check the official website for any doubt or query.